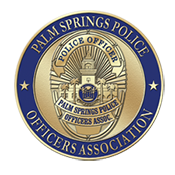 The City of Palm Springs was incorporated in 1938.
The Police Department was operating as a Police Protection District with four officers.

The City purchased the District in 1940 and on October 30, 1940 there was an official Palm Springs Police Department.

The Department consisted of the following personnel:

The City closed down sometime between Easter and June 1st. It came back to life around October 1st. Because the City Fathers could not justify salaries for full time officers until Autumn, a skeleton crew worked the summer months.

The majority of officers were seasonal. As the demand for police decreased in Palm Springs during the summer months, it increased in resorts like Catalina, Avalon, Laguna Beach and Lake Tahoe. It was not unusual to see Palm Springs' finest working in these cities for the summer.

There was one fringe benefit that all city employees received, regardless of seniority: 30 days paid vacation. This was justified by local doctors who recommended getting out of the heat and dryness of the desert, for health reasons. This was discontinued about 1960.

The first Police building was located on North Palm Canyon. The village was too small for addresses. But, it was located roughly where the Lobster Company restaurant is now.

There have been eleven Chiefs of Police since 1940.